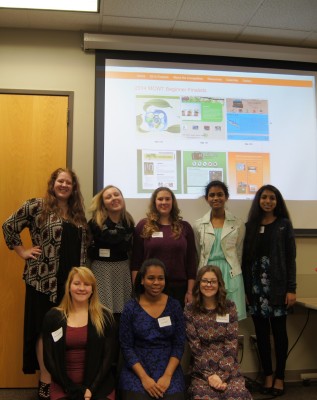 The Michigan Council of Women in Technology Foundation (MCWT) proudly hosts the longest-running website design competition for girls in the state of Michigan. The competition is open to middle and high school girls.

Beginning in 2006, The first competition was limited to one high school, which participated in MCWT’s GET IT program. (GET IT stands for Girls Exploring Together – Information Technology.) That first year, just three girls designed websites and presented them to a group of MCWT members.

The website design competition is adjudicated by over 70 judges from MCWT’s partner companies who examine the entries and select finalists.  The finalists are invited to present their sites to a second panel of six judges, consisting of CIOs and managers of large Michigan companies.

Significant enhancements have been made to the competition throughout the years:

Each year, MCWT Foundation and its partner companies look forward to seeing the remarkable achievements of the girls who participate in the Website Design Competition.

MCWT is a progressive organization that inspires and supports women as they enter, advance, and contribute to Michigan's technology community. END_OF_DOCUMENT_TOKEN_TO_BE_REPLACED